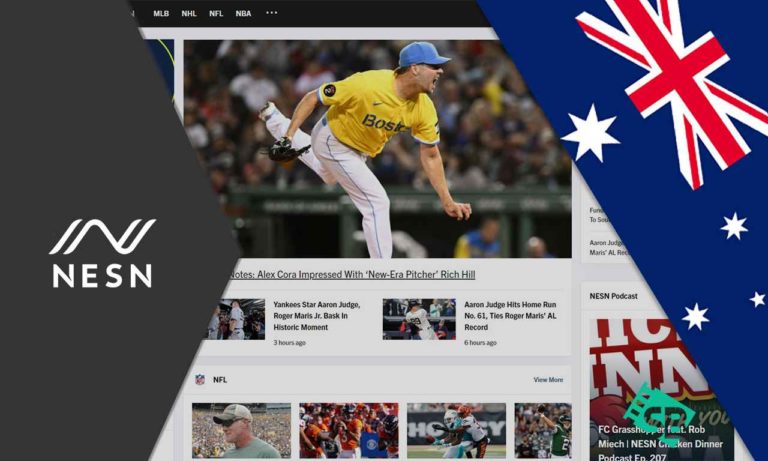 Missing out on your favorite NESN sports shows while you’re away? In this guide, we’ll show you how to watch NESN in Australia with the help of a Premium VPN ExpressVPN, as NESN is not directly available in Australia.

New England Sports Network, commonly known as NESN, is a US-based regional sports channel that is broadcasted through cable and satellite TV networks.

It primarily focuses on bringing all local games that are not usually not aired by national TV networks. From baseball league games and regional college sports to various sports talk shows and originals, NESN offers live games and on-demand content that make it stand out.

Red Sox Recap, David Ortiz: Unstoppable, Dining Playbook, Sox Appeal, and The Tradition are some of the NESN originals that you can stream. Other than that, you can watch live games from NHL, MLB, NFL, NBA, UFC, Premier League, and many other exciting sports.

You can stream NESN channel through NESN 360 by linking your cable TV provider or a parenting live TV streaming service like FuboTV.

However, you will need to bypass the geo-restrictions of NESN with the help of a top-quality VPN service. Let’s find out how to unblock NESN abroad using a VPN app.

How to Watch NESN In Australia with a VPN? [Easy Steps]

Note: Don’t know how to create an account on NESN? Read about it later in the guide!

Why You Need a VPN to Watch NESN in Australia?

You can’t directly access NESN in Australia without cable. You will be needing a subscription to Fubo TV or another US streaming platform offering NESN in its bundle. However, FuboTV is a strictly geo-restricted service that’s available in the US and a handful of other countries.

For instance, when you try to open FuboTV without a VPN, the following location error message will appear on your screen:

fuboTV content is currently not available in your location.”

These geo-restrictions are placed on the streaming platform in compliance with the licensing agreements and copyright laws. These laws require you to be present in the United States to access NESN via Fubo. Technically, you need an American IP address to be able to access NESN.

A premium VPN like ExpressVPN is designed to provide you with online security and an added layer of privacy. It also helps you to change your IP address to any country you want.

For example, to watch NESN through FuboTV, you can simply connect to a US server. As a result, your internet traffic will appear to be coming from the United States and there’ll be no geo-restriction any longer.

How can You Create an Account on NESN In Australia?

Creating an account on NESN is easy. However, a VPN is a must if you are in Australia. Follow these steps to register a NESN account:

What are the Best VPNs to Watch NESN In Australia?

We have compiled a list of the 3 best VPNs to Watch NESN in Australia after evaluating more than 50 VPN applications.

These VPNs provide unmatched unblocking capabilities, lightning-fast speeds, and the dependable network of servers needed to get around geo-restrictions. Let’s examine in detail some of our top choices:

ExpressVPN is the best VPN to watch NESN in Australia because of its high-end features and unremitting speeds. With these servers, you can get a phenomenal downloading speed of 89.78 Mbps.

Connect to the New York server and unblock NESN in Australia!

It features over 3000+ servers in 94+ countries, including 25+ server locations in the US.

ExpressVPN provided us with amazing speed!

This VPN also works fine with Sling TV in Australia and enables you to watch NECN TV in Australia. Moreover, if you are looking to unblock Nat Geo WILD in Australia, ExpressVPN is a perfect choice.

Because of its exceptional functionality, ExpressVPN’s MediaStreamer is one of the reasons for its popularity. With this Smart DNS function, you can easily watch geo-restricted content on practically every device without downloading the VPN configurations.

Your online privacy is protected by ExpressVPN’s AES-256-Bit Encryption, Zero-Logs Policy, Automated Kill Switch, and Lightway Protocol. This great VPN is offered for AU$9.39/mo (US$6.67/mo) (Save 49% and get 3 extra months FREE with 12-month plan), including a 30-day money-back guarantee.

Surfshark VPN is a budget-friendly VPN to unblock NESN in Australia. With a 30-day money-back guarantee, you can subscribe to Surfshark for as little as AU$3.5/mo (US$2.49/mo) (83% Off on 2 Years Plan).

There are almost 3200+ servers available in 65+ countries worldwide, including 600+ in the US. 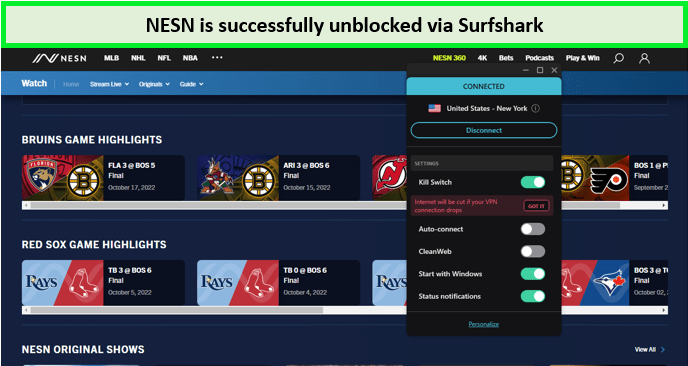 Connect to the New York server and unblock NESN in Australia!

Surfshark provided us with superfast speed, enough for an amazing streaming experience!

You can also use Surfshark to watch Freevee or unblock MSNBC in Australia.

Surfshark is an excellent choice for using a VPN on iOS, macOS, Linux, Android, and Windows-based devices since it allows unlimited multi-logins. There are separate applications for a number of streaming media devices, including Macbook, PCs, smartphones, Smart TVs, Fire TVs, and many more. You also easily watch Ovation Channel or PBS kids in Australia on any of the compatible devices with Surfshark.

There are many state-of-the-art features regarding security and privacy, including Camouflage Mode, Multi-Hop, AES-256-Bit encryption, and Kill Switch.

Surfshark makes sure that you experience the best streaming performance. A 1-week free trial is also given to you when you sign in with your Google Play Store or Apple App Store.

NordVPN is the largest server network to access NESN in Australia. With this VPN, you may connect to 5310+ servers from 59+ countries in the world, with more than 1970 servers in the US only.

NESN is one of several streaming services that can be unblocked by NordVPN’s US servers.

Speed test results of NordVPN’s Dallas server when tested over a 100 Mbps connection.

With NordVPN, you can also watch The Word Network and Ovation in Australia.

NESN offers 24/7 access to the live feed of NESN and NESN+ as well as the VOD content library. Live games include matches from Red Sox and Bruins and another 300+ live games from different regional sports in New England.

What are the Best Sports Shows on NESN to Watch in 2022?

Here are some of the best sports shows on NESN to watch in 2022:

How to Watch NESN in Australia on your Device?

NESN offers dedicated apps for different devices and can also be streamed through web browsers on compatible operating systems. Here’s a list of devices on which you can watch NESN in Australia:

Let’s find out how to install NESN on different devices.

How to install NESN on my iPhone?

Follow these easy steps to install NESN on your iPhone through Fubo TV:

How to install NESN in Australia on my Android?

Follow these easy steps to install NESN in Australia on your Android through Fubo:

How do I get NESN channel in Australia?

NESN is accessible through satellite, cable, and digital streaming providers like Fubo TV and DirecTV. Make sure to connect to a VPN to access it form abroad.

Can I get NESN on Comcast in Australia?

Yes, you can get NESN on Xfinity (Comcast) in Australia but a VPN is needed to access it.

Can I watch NESN on Spectrum in Australia?

Yes, you can watch NESN on Spectrum in Australia with the help of a premium VPN app.

Is NESN free in Australia?

No, NESN is not free in Australia. Rather, you need to buy a subscription to access the coverage and on-demand library.

Can I watch NESN without cable in Australia?

Yes, you can watch NESN without cable in Australia through a digital cable TV provider like DirecTV and Fubo TV.

What sports are on NESN?

If you are moving to Australia and don’t want to miss out on your favourite sporting action, you will need a VPN app to watch NESN in Australia.

You can also access the NESN channel FuboTV stream in Australia and several other local and international sports. So, don’t wait anymore and get a subscription to ExpressVPN to enjoy NESN and other geo-restricted sports platforms from anywhere.