From the ghastly Nemesis brutes to Albert Wesker’s malevolent mind, Resident Evil has introduced some of the meanest villains on the gaming horizon, and even that’s an understatement.

Across a string of widely popular games, comics, and spinoffs, the essence of villainy in the series remains a mainstay.

When we talk about horror video games, Resident Evil is a cult classic. There are a whole lot of daunting Resident Evil villains who’ve graced the series, with a few of them leaving a more significant influence than others.

The bona fide cloning lab of villains has produced dozens of utterly notorious characters, be they cult leaders, mutants, super-human executives, or zombies.

However, before you delve into this list further, we recommend watching ​​Resident Evil movies in order if you don’t want any spoilers. We would also like to recommend you to go through the Resident Evil animated movies to get a better understanding.

But which villain can be labelled the grimmest of all? We are going to explore the 14 scariest Resident Evil villains who have made it to the elite company of the most blood-curdling evil-doers of all time. So, read at your own risk!

Capcom’s survival horror game series has produced a diverse clan of villains that no one would want to mess up with. Some of them left an everlasting mark on the series, while some failed to live up to their hype.

Here is a closer look at the Resident Evil villains ranked from worst to best.

Carla Radames’ presence stays hidden for the most part of Resident Evil 6, or it seems like that. But in reality, she appears quite a lot throughout the adventures of the game, as she is impersonating her doppelganger, Ada Wong.

The ominous mystery that is surrounding her character is what makes Carla a compelling figure or you can say, villain. However, her being the leader of Neo-Umbrella has quite less original objectives. Just like many other villains, she just simply wants to untether a virus to take over the world.

The aristocratic twins, Alexia and Alfred Ashford have social pretensions and they disparage everyone around them. Although, their superiority is not the worst trait they have. Their evil escapades started in early childhood when they mutated their father with the T-Veronica Virus.

In Code: Veronica, Alfred attempts to murder Steve Burnside and Claire Redfield, while often impersonating his sister. However, he dies during Alexia’s imprisonment in the cryogenic chamber, and as soon as she’s freed, her revengeful journey begins.

Lord Karl Heisenberg is arguably the most fascinating antagonist and the Resident Evil Village villain. He’s a human mutant living in a mountain village located somewhere in Romania.

He operates the Heisenberg Factory, an inherited fortune, where he produces his Soldats comprising human parts and machines. He hates serving as a lieutenant to Mother Miranda. Heisenberg decides to rebel against Miranda but gets killed before achieving his goal.

Despite the fact that Oswell E. Spencer barely made any appearance in any of the Resident Evil games, he is arguably one of the most atrocious villains of them all. He is the president and one of the founders of Umbrella.

Working in the shadows behind his puppets, he is undoubtedly responsible for many of the heinous activities that occur in Resident Evil. He has plans to make a new world made for a supposed superior race where he expects to be a God, who will rule over these superior beings and advance society.

Jack Baker has to be one of the best characters that appear in Resident Evil 7, but he is also the most terrifying one. His power to regenerate makes it quite difficult to lay any significant injury to his body. This quick regeneration ability alone makes it almost seems impossible to kill him.

Aiding this is the fast speed Baker has and his capability to use the heaviest weapons. He can even use his liquefied body parts as weapons. However, the thing that sets Jack to stand separate from others is his personality. He is rigorously malevolent. 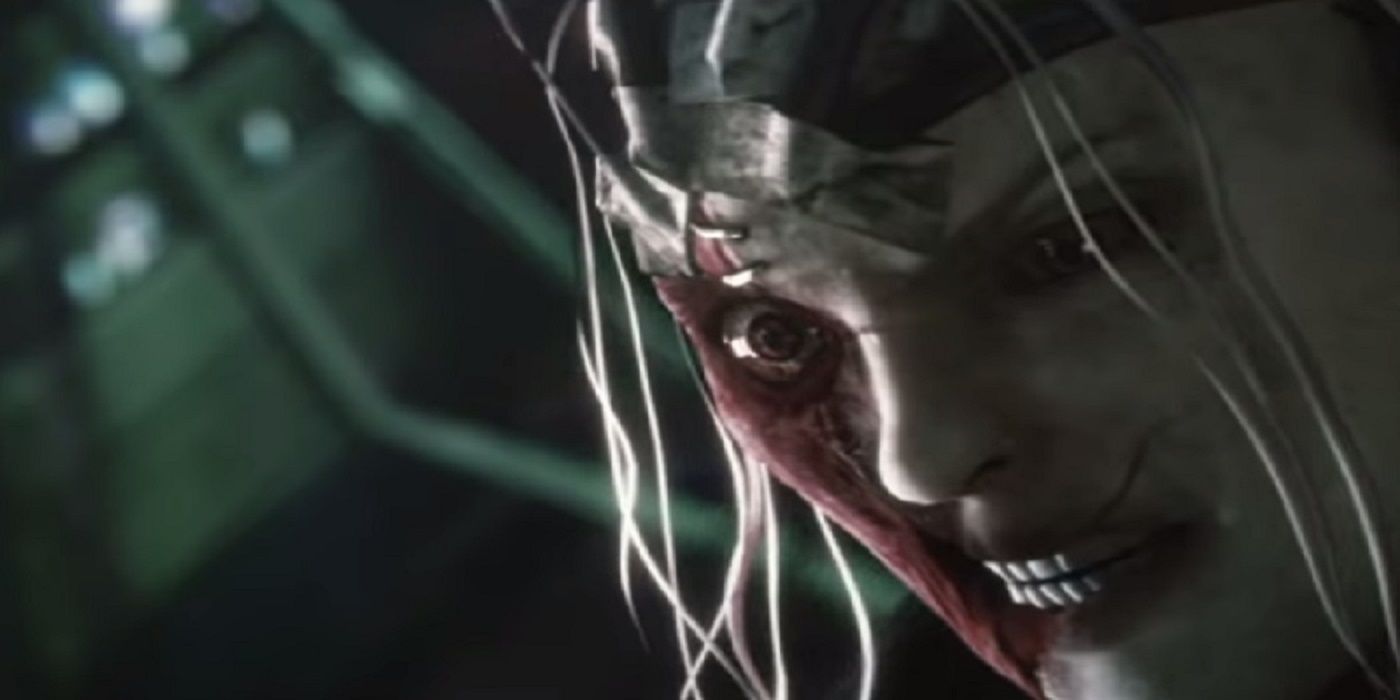 Typically, an entry that mostly is forgotten in the franchise of the Resident Evil series is Revelations 2 and so do its villains that go unnoticed like Alex Wesker. Yes, you suggested right by the name, she definitely is part of the famous villain Wesker family.

During the game Revelations 2, she set her mind to accomplish immortality by relocating her consciousness into the special body of Natalia Korda. It is quite common for the villains in Resident Evil to try to become more powerful.

Miranda may not pass to be the biggest villain of the series, but her influence solely impacted the franchise for decades. Mother Miranda is the only villain in the Resident Evil series whose presence and influence can be traced back to the early days of how it all started.

Thanks to the work she has done as a biologist, her findings were the base that inspired Oswell E. Spencer to go create the T-Virus and initiate the Umbrella Corporation in the first place.

Played / Voiced By: Gary A Hecker

As horrifying as the Resident Evil villains can be, they can not get more terrifying than Mr. X, aka Tyrant, aka T-00. In both the Resident Evil 2, original and its remake, he always breaks through the walls while chasing down the protagonists.

His purpose of being is to eliminate the survivors of the virus in Raccoon City Police Station and also find the G-Virus pendant.

Nemesis is also one of the strong antagonists that a complete game was created around him. In Resident Evil 3, he is a threat that is hanging on Jill’s head as he keeps trying to hunt him down. He is far more advanced in comparison to a normal bulking tyrant.

The sole motive behind his existence and the one and only mission of his life is to hunt down and finish all of the S.T.A.R.S members.

The Living Dolls are a bunch of belligerent species in the Resident Evil Village. These antagonistic dolls are mutated by a mysterious parasitic organism. The sole purpose of their existence is to serve as the minions of a fearsome lady Donna Benevento.

These dolls dressed in black and white extend metallic spider-like claws when in their attacking mode, covered by blackness caused by their eyes.

William Birkin, a genius scientist and a prominent one in Resident Evil 2 villains, works on both the G and T Viruses. While he was working on the G virus, the Umbrella corporation tried to kill him. However, he lives through the murderous ambush by injecting the G-Virus into himself.

And from that point, he levels up from being just another villain working in the back end to a physical threat to every other being he meets.

Lady Dimitrescu is a new Resident Evil villain, presented as some gigantic woman who has the traits of a vampire. She resides with three same monstrous nature daughters in Castle Dimitrescu.

She looks after the village alongside the other three mutant villains under the leadership of the supreme leader who we know as Mother Miranda.

Resident Evil is surely many things but not a series that is known for having sympathetic villains. And nonetheless, it is a bit hard to not feel just a little sympathetic for Eveline.

Unlike any typical Resident Evil series villain, all Eveline desires is a family of her own. Unfortunately, due to the power she possesses and homicidal tendencies, having a family life is something that is not for her.

Having similar plans to what Oswell Spencer thinks, but obviously, Wesker thinks that he has to be the one who should be ruling this new world as a god. To complete his goals, he uses his insanely superhuman powers, as he has unbelievable speed and strength.

Who are the main villains in Resident Evil?

According to the appearances throughout the Resident Evil series, Albert Wesker stays the main villain on top of all.

Who is the best villain in Resident Evil?

Looking at the fan liking, Albert Wesker always scores the position of being the best villain in the complete Resident Evil series.

Who is the scariest Resident Evil character?

Eveline seems to be the scariest Resident Evil character ever, being the supreme antagonist of Resident Evil 7: Biohazard. Eveline proves to be one of the most horrifying aspects of the game.
She can be seen infecting various characters, manipulating their minds, changing the shape of their bodies, and turning them to be enemies the players have to defeat.

Since its debut in 2002, the Resident Evil series has come a long way, and even after 25+ years, the series is up and running, with its latest release Resident Evil: Welcome to Racoon City in 2021. There are several movies like Resident Evil, but none of them offers the same aura.

If you want a more in-depth review of the franchise, we’ve gone ahead and ranked Resident Evil movies as well. Of course, that’s how we and our fans feel about the movies.

Time and time again, Resident Evil movie characters have redefined their acts and how cruel they can actually be. We have ranked the 14 scariest Resident Evil villains from worst to best. Who did you find to be the scariest of all? Do let us know in the comments.