How to Watch Grown-ish Season 4B on Hulu Outside USA 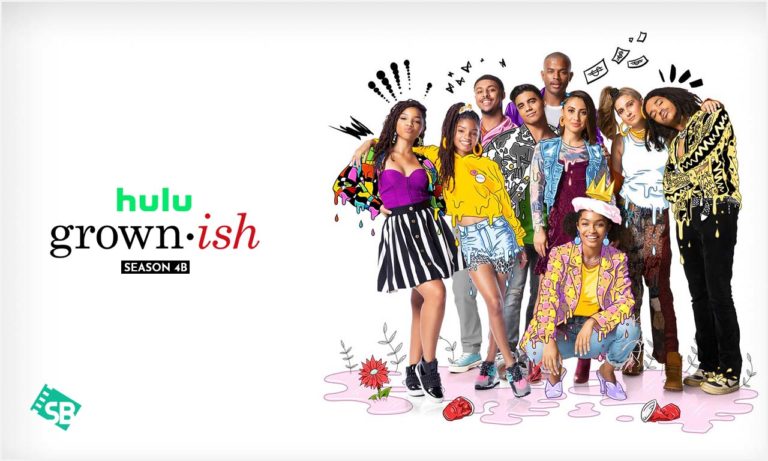 Looking to watch Grown-ish Season 4B on Hulu outside USA? Then, you need a VPN. It shouldn’t just be the US audience that gets to enjoy the second part of the fourth season, coming on 28th January 2022. This spin-off of ABC’s ‘Blackish’ turned out to be an excellent choice to stream.

If you’ve kept up with the seasons, you’d know of Zoey Johnson’s struggles to fit in with the crowd. Raised as the only daughter, she is met with new challenges in the world. Speaking of challenges, getting the 4B season of Grown-ish outside the USA is difficult, but this guide will help you get ready.

Quick Steps: How to Watch Grown-ish Season 4B on Hulu Outside USA with a VPN

To watch Grown-ish Season 4B on Hulu outside USA, you will need a VPN. Here’s how you do it:

Grown-ish season 4B will be exclusively available on Hulu from 28th January 2022. The show currently has 4 seasons, and the most recent was divided into two. It has a total of 60 episodes and the first episode aired on January 3, 2018.

After 4 exciting seasons (4 and a half to be exact), Zoey has gotten a hold of college life. In the upcoming season, Zoey is dating two guys, both of whom have different opportunities. One of them plans a trip to South Africa, and he feels that bringing Zoey on the trip would help.

But the other boyfriend is a project partner who tells her about an investor looking to help them scale their project. When she gets a chance to launch her project ‘anti-muse’ in New York, she is left in between the ultimatum. The senior year’s looking pretty confusing for her, as she balances her family’s expectations.

To stream Grown-ish season 4B on Hulu, you will need a VPN. Normally our votes go in favor of ExpressVPN, due to its high speed and network bandwidth. Instead, we will share the 3 best VPNs for streaming Hulu outside the USA.

ExpressVPN: Best VPN to Watch Grown-ish Season 4B on Hulu

Streaming on a VPN requires efficient use of bandwidth and high-speed buffering. This is where ExpressVPN outranks amidst the rest. It has been the customer’s favorite due to its fast-streaming speeds, powerful server network, and incredible customer support. It has a server network of 3000+ servers in over 94+ countries.

Featurewise, ExpressVPN is equipped with VPN split tunneling, AES-256-bit encryption, and security protocols like OpenVPN IPSec, LT2P, and more. One subscription allows you to stream on 5 devices simultaneously so everybody at home can enjoy it. Independent testing has shown its bandwidth speed peak of 89.38 Mbps on a 100 Mbps internet connection.

They are currently running a promotion on their annual plan which costs you US$6.67/mo (Save 49% and get 3 extra months FREE with 12-month plan) and supports a 30-day moneyback guarantee as well.

Surfshark: Pocket-Friendly VPN to Watch Grown-ish Season 4B on Hulu

Surfshark is the market’s most price-friendly and well-equipped option. It already made headlines as PCMag’s Editor Choice 2021 recipient and won the Gold at the Global Cyber Security Awards. Every feature and endorsement justifies its reputation in the market. Surfshark has3200+ servers in 65+ countries.

Surfshark comes with advanced malware and ad blocking technology. Its security protocols give out Surfshark alerts, that inform the user of suspicious attempts and hack attacks. One mind-blowing feature is that Surfshark allows unlimited device use simultaneously in one subscription.

Surfshark has received multiple endorsements from platforms like CNET, Forbes, PCMag, etc. Its most pocket-friendly plan comes at a price of US$2.49/mo (83% Off on 2 Years Plan). You can always test it out first for 30-days before you commit to the 2-year plan.

When it comes to heavy and extreme use of a VPN that’s not mainstream, we recommend NordVPN to the market. For great speeds, a VPN service must have a great number of servers and high-tech functionalities in all. NordVPN has a huge server network of 5310+ servers in 59+ countries, so it checks out the boxes of speed.

NordVPN was crowned as the best VPN overall winner of 2019, and it was justified due to its features and price. It is one of the few VPNs that have multi-factor authentication. The promise of online anonymity is fulfilled with NordVPN encryption paired with The Onion Router for maximum security.

Besides being one of the best VPNs to watch Hulu, you can also unblock ABC outside US, watch Peacock TV outside US, etc

It even supports the option of “double-hop” where the person’s IP address is masked twice to ensure pure anonymity during your streaming activity. It also has a 2-year plan that costs US$3.29/mo (Save 60% on 2-year plan). It also supports a 30-day moneyback guarantee.

How VPN Allows you to Access Hulu Outside USA

A VPN lets you change your virtual location by masking your IP address and allows you to unblock geo-restricted websites.

Services like Hulu, Amazon Prime, HBO Max, Youtube TV outside US, etc. restrict their content viewership to regions. It is the countless hours of research of marketing that justify why a production release is region-bound. Just like Grown-ish, some of the great features of Hulu are only for the USA audience.

The way they determine the USA audience is by reading the IP address of the user. This is where the VPN comes into play. A VPN masks your IP address and gives you a fabricated IP address from a server located in the desired place. By doing so, we can stream all the exclusive content of Hulu from anywhere.

If you’re new to creating a Hulu account, here’s what you’ll need to do:

Introduction of Grown-ish Season 4B Characters

Following are the introductions of the characters in the hit comedy-drama, Grown-ish:

How many episodes are in season 4 of Grownish?

There are 14 total episodes in season 4 of Grown-ish.

Is Grown-ish season 4B out?

Will there be a Grownish Season 5?

There is no official announcement yet about the renewal of the show for another season.

To sum it up, to watch Grown-ish Season 4B on Hulu outside USA, you’ll need a premium VPN like ExpressVPN. Out of the 3 we shared; we hope you find your favorite. Be sure to get the popcorns ready as season 4B shows whether Zoey will choose love or career. Happy streaming!