How to Watch Shameless Season 11 on Netflix Outside USA 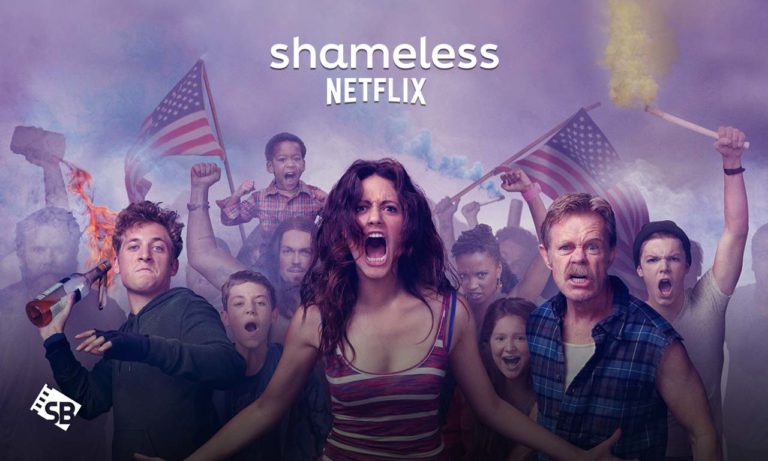 The misadventures of the Gallagher family are back in the final season that is available on Netflix. If you’re one of the fans looking to watch Shameless season 11 on Netflix, then you’ve come to the right place.

Unfortunately, it is only available on Netflix USA, which is why the best solution is getting a VPN.

The final season of Shameless had aired on 6th December 2020, but from October 11, 2021 on Netflix onwards, the fans can watch it on Netflix USA.

And for you to get access to watch Shameless season 11 on Netflix outside USA, we’ll show how that’s possible through a VPN. We’ll also take you through the series of detail, followed by VPN choices to pick from.

Quick Steps: How to Watch Shameless season 11 on Netflix outside USA

For accessing geo-blocked Netflix regions and streaming them will full speeds, we recommend ExpressVPN for the job. Here’s how you do it:

Evidently, the Gallaghers stay unstoppable, even in the global pandemic, as you can see in the trailer below:

Shameless series revolves around the Gallagher family, the poor, dysfunctional family of six kids and a single father. Frank spends his days getting drunk or getting in trouble.

It’s the kids (Fiona, Philip, Ian, Debbie, Carl, and Liam) who are left taking care of themselves. In their misadventures, the Firestarter is always Frank and the kids are left cleaning the mess.

In season 11, amongst the global pandemic, the Gallagher family lives on Chicago’s South Side. They are in a constant battle against gentrification, selling legal weed (yes, it is legal there!), and getting the Milkovichs to move out of the neighborhood. With some necessary lessons along the way, the Gallagher family misadventures come to an end.

Best VPNs to Watch Shameless Season 11 on Netflix outside USA

It’s good news that thanks to a VPN, you can watch Shameless season 11 on Netflix by connecting to the USA server. And to make sure this experience is as smooth as butter, we’ve handpicked some of the best VPNs in the market.

When it comes to accessing geo-restricted regions of Netflix and streaming seamlessly, we turn to ExpressVPN. It is undoubtedly the best VPN choice to watch Shameless season 11 with.

It has won the crowd in the past for its impressive speeds, responsive customer service, and worry-free experience. It was acknowledged as “Best VPN for Speed” by VPNMentor.com in 2022.

ExpressVPN houses a powerful network of 3000+ servers in 94+ countries in over 90 countries. It is equipped with Lightway Security Protocol that is designed for a faster and more reliable VPN experience.

With the help of these fast servers, you can watch Fate Series in order at full speed without any buffering issues.

Through TrustedServer technology and Private DNS, every server stays protected. It has perfected the essentials like VPN tunnelling, SmartPlay technology, Threat Manager, and ISP throttling.

You can use ExpressVPN on up to 5 devices simultaneously or you can use the Router app to enhance the number of devices connected which means you can watch Siberia on Netflix outside USA.

Surfshark is a strong competitor in the market, which is relatively fresh in the market, but delivers insane value. After analyzing its features and benefits against its pricing, we can say Surfshark is the most pocket-friendly VPN in the market. Back in 2021, Surfshark was listed under “Top 3 fastest VPNs” according to AV Compares.

Surfshark VPN’s network of 3200+ servers in 65+ countries, which is 100% RAM-only servers equipped with 1Gbit ports.

These servers are lightning-fast which make you able to watch Power Rangers on Netflix outside USA without any buffering issues.

It runs security protocols like IKEv2, SOCKS5, WireGuard, or OpenVPN. It runs the latest AES-256-GCM encryption tool. It has nailed the necessary features like GPS Spoofing, Bypasser, KillSwitch, Multihop connect, No Borders Mode, and more.

Based on the features above you can easily watch This is Us on Netflix in USA without any lagging issues.

Surfshark’s super generous policy allows it to be used on unlimited devices simultaneously. It is priced at US$2.49/mo (83% Off on 2 Years Plan). It even supports a 30-day risk-free trial period.

NordVPN is another excellent choice in the market because it delivers blazing fast speeds in streaming, followed by incredible security incentives.

These are great speeds to watch everything in New on Netflix 2022 at the full speed.

For faster speeds, you need a vast network of servers, and we can proudly say that NordVPN is the largest server network VPN choice for bypassing geo-restrictions of Netflix. It was acknowledged in 2020 as the winner of the CHIP.de Awards.

NordVPN’s network of 3200+ servers in 65+ countries. Some of these servers are obfuscated servers that work better at hiding internet traffic. Use these servers to watch Bombshell on Netflix in USA and you won’t have any trouble.

NordVPN even comes in the form of a lightweight extension for your browsers to safeguard your surfing experience. The two major security integrated is Threat Protection and Dark Web Monitor.

NordVPN can be used to protect 6 devices at once on one subscription. NordVPN has a base price of US$3.29/mo (Save 60% on 2-year plan). NordVPN also offers a 30-day moneyback guarantee.

Why Do You Need a VPN to Stream Shameless season 11 on Netflix Outside USA?

You may be wondering why Netflix says they have “Shameless” in their content library and you can’t find it in yours, right? And no, there is no special add-on of Showtime to get it either.

The fact is that due to licensing agreements, the Shameless series is available to one certain region and not others.

To get access to Shameless Season 11 on Netflix, you will need one of the best VPNs for Netflix such as ExpressVPN. What it does is mask your original IP address and grant you a VPN-aided IP address.

Simply connect your VPN to a server located in USA, and you’ll be able to watch Shameless Season 11 on Netflix outside USA.

The Gallagher clan is back, even during a difficult time like in the pandemic. After a decade of misadventures, the family plans to end it on a high note.

In the last season, we’re expecting big changes to hit every member of the family and will surely learn some important lessons along the way.

The Gallagher family is in a constant battle with gentrification, followed by selling legalized weed. They also plan to rid the neighborhood of the Milkovichs.

Through these crazy adventures, the season has one thing clear: they may have misadventures all the time, but nothing separates them.

The Cast of Shameless Season 11

According to IMDB the cast of Shameless Season 11 are as follows:

Where can you watch season 11 of Shameless?

The 11th and final season of Showtime’s Shameless is available to stream on Netflix USA from October 11, 2021.

How can I watch Shameless in Europe?

Unfortunately, our European fans cannot watch Shameless due to geo-restrictions, but here’s how you can watch it with a VPN:

Is Fiona coming back in season 11 of Shameless?

Sad news for Fiona lovers because she won’t be making a comeback in the final season of Shameless! Fiona Gallagher is the eldest sister and guardian of the family who left the show in season 9, and we won’t be seeing her again!

How many episodes will season 11 of Shameless have?

There are 12 episodes of Shameless season 11.

To summarize, you can watch Shameless season 11 on Netflix from October 11, 2021. But because of geo-restrictions, this feature will be available for the USA audience only, which is why you need a VPN.

Out of the many we’ve shared, our top recommendation is ExpressVPN. With a VPN and a Netflix account, you’re all set to stream Shameless season 11.