Amid the ongoing Spotify controversy, Joe Rogan has apparently got new options. The vexed podcaster was offered $100 million to leave Spotify and jump to a right-wing platform on Monday.

The Swedish audio streaming and media services provider, Spotify is currently available in 180+ countries. And you can unblock Spotify from anywhere with a VPN if it’s not available in your region.

Chris Pavlovski, the Chief Executive of Rumble, a Canada-based video-sharing platform, tried to lure Rogan to join them through a letter posted on the Twitter account of the company.

“We stand with you, your guests and your legion of fans in desire for real conversation. … How about you bring all your shows to Rumble, both new and old, with no censorship, for $100 million bucks over four years?” Pavlovski wrote. “This is our chance to save the world. And yes, this is totally legit.”

Rumble was founded in 2013 and is considered as a potential substitute to YouTube and “big tech.” It includes personalities like Dinesh D’Souza, Dan Bongino, and Steve Bannon. Rumble got media hype last month, by deciding a deal with the social media app of former President Donald Trump; Truth Social.

Rogan often terms himself as a liberal, however, the UFC commentator often makes headlines for his right-wing views related to trans athletes in sports, guns, censorship, and the government’s role during the pandemic. His ongoing Spotify deal, which was penned in 2020, is supposedly worth in excess of $100 million.

The Rumble offer made to Rogan follows Spotify removing nearly 70 episodes of The Joe Rogan Experience show from its platform after the podcaster came under heavy fire for hosting anti-vax guests and a compilation of him using the N-word during the past years.

The compilation video showed that Rogan used the racial slur more than 20 times in the footage collected from different episodes of his podcast, which according to him were collected over a time span of 12 years.

Rogan says that previously he has used the n-word as part of his speech, giving an example of the time when he debated over a Richard Pryor album or the frequent usage of the term in “Pulp Fiction” Quentin Tarantino’s film that came out in 1994.

He said, “For a long time, when I would bring that word up, like if it would come up in conversation.” Rogan added further, “Instead of saying the n-word, I would just say the word. I thought as long as it was in context, people would understand what I was doing.”

Just recently, in one of his podcasts last week with the guest Jordan Peterson who is a Canadian psychologist and climate change skeptic, Rogan brought up the topic of race with him. After a short-lived debate on the “spectrum of shades of people,” Rogan said it seems strange to him to call anybody Black or White looking at the tone of their skin.

Spotify CEO Daniel Ek also made it clear over the weekend in his letter to the staff that the banner is staying by the under attack podcaster.

He sent out an email to his Spotify staff in which Ek wrote, “I want to make one point very clear — I do not believe that silencing Joe is the answer. We should have clear lines around content and take action when they are crossed, but canceling voices is a slippery slope. … While some might want us to pursue a different path, I believe that more speech on more issues can be highly effective in improving the status quo and enhancing the conversation altogether.”

On Monday as well, the stock of Spotify, which has been declining for months, eventually fell to levels of the pre-Rogan era.

To put into context, Spotify closed the day with its stock valued at $161 on May 18, 2020,  a day prior to the announcement of the deal between Spotify and Rogan to air The Joe Rogan Experience, and then the very next day closed at $175.

The stock kept reaching record highs for several months, reaching its peak at $364 per share on February 19, 2021. However, as of last Monday, Spotify’s Rogan-centered gains have almost vanished, with the platform trading at almost $170 per share. 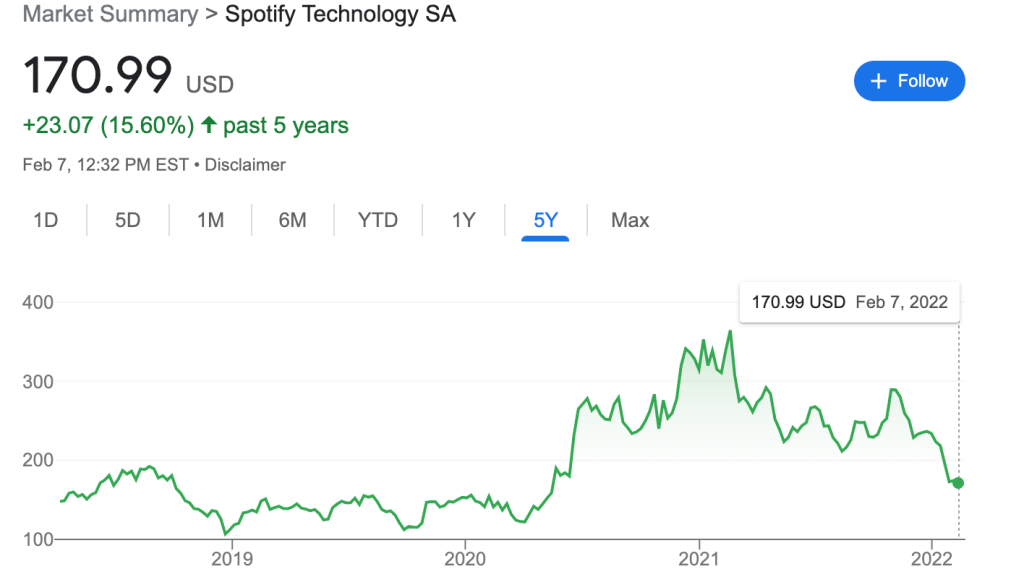 It is pertinent to mention that Spotify’s stock slump started even before the Rogan controversy and picked the pace during the recent weeks amid an overall decline in tech stocks this year. The decline was also reported in the company’s own revenue report last week, which revealed a lesser subscriber growth.

Nevertheless, one of the defensive strategies of the business could be the agreement made with Rogan and the way the podcaster gave a boost to the company’s stock price, and interestingly the company has ended up falling to the point where it left off before agreeing on the deal.

The New York Times report which came out in 2021, according to which music industry’s educated guess Spotify’s payout rate is half-cent per stream to music artists, an amounted rate that is mostly divided between the artists and the record companies.

Neil Young was amongst the first music artists who asked Spotify on January 25 that he wants his music deleted from the streaming platform. Later on, he was united by Joni Mitchell in the matter shortly after his statement and now an expanding list of musicians and artists are following them in calling out to Spotify or they are leaving the channel completely.

One day earlier, on 24 January, Young posted a letter which is now deleted on his website giving an explanation that as long as Spotify will keep carrying on Rogan’s popular podcast, he wants to keep his music off the platform.

In the latter, he wrote, “I am doing this because Spotify is spreading false information about vaccines — potentially causing death to those who believe the disinformation being spread by them.” Soon Spotify completed his request.

It’s too early to tell if any of the boycotts of the platform that are led by singers and musicians like Joni Mitchell and Neil Young will have any major effect on Spotify’s baseline.

Last week, Ek made a statement addressing the subject in an earnings call. He said: “So the easy answer is, we don’t reflect any churn from the recent Joe Rogan thing in general. What I would say is it’s too early to know what the impact may be. And usually when we’ve had controversies in the past, those are measured in months and not days.”

The CEO Ek, in an email to his staff also dedicated to an “incremental investment of $100 million for the licensing, development and marketing of music (artists and songwriters) and audio content from historically marginalized groups” to enhance “all types of creators,” that will include the ones from backgrounds where they do not get any good kind of representation.

In recent days, the controversy stirring due to Spotify’s podcaster Joe Rogan has taken a surge, together with the backlash following the podcaster for including misinformation about anti-vax and a viral compilation of Rogan using the N-word circulating, which was posted by musician India. Arie. The podcaster later made an apology over the weekend, calling his comments “the most regretful and shameful thing that I’ve ever had to talk about publicly.”

Joe Rogan can prove to be a massive compelling force for Rumble, and Chris Pavlovski played the right card by sending an open letter to the podcaster. The celebrated yet controversial Rogan helped Spotify to leapfrog the levels of rising revenue before the controversy hit the reputation of both the podcaster and the streaming platform.

Cardi B Awarded $1.25 in Lawsuit Victory