Jedi being stronger than the Darth Wader should not surprise the OG Star Wars fans as the franchise has already broken the ice with the Star Wars: Revenge of the Sith, showing Jedi much powerful than Darth Wader. 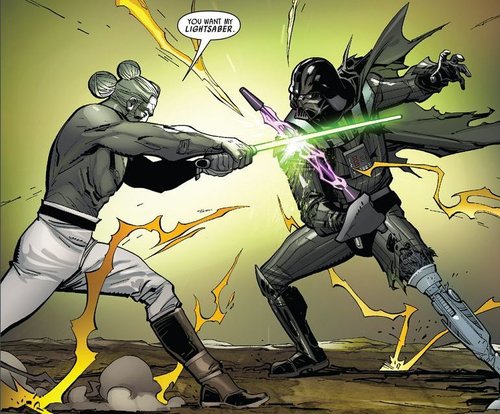 However, bringing Brie Larson into the Star Wars universe as one of the most powerful characters encountering Darth Wader powers might be shocking for many fans.

Although it was being considered as the masterstroke from the show’s creators as Brie Larson has already portrayed the strongest Avenger in Marvel Cinematic Universe, giving tough time to Thanos so it would not be hard for viewers to watch Brie Larson in one of the strongest roles in the Star Wars reboot.

What started as a rumor became a piece of solid news when the pictures of Brie Larson dressed up as Jedi Master went viral on the internet. Watch the Marvel movies in order of release to obtain a thorough understanding of the franchise.

If Brie Larson’s Jedi is supposed to overpower Darth Vader, then she would probably essay the role of Kirak Infil’a (a New Jedi Master) who have bested the Darth Vader in the fourth edition of Darth Vader: Dark Lord of the Sith book.

However, the Kirak Infil’a is a male Jedi Master in comics. In that case, it would be the second time for Brie Larson to play the male comic book lead after Captain Marvel.

The Oscar-winning 31-year old actress already associated with numerous projects and also expressed her love for Star Wars and even auditioned for Star Wars: Force Awaken. Now, giving the opportunity to play one of the most sought-after characters of cinematic history would be exciting as well as challenging for Brie to live up to the fan’s expectation.

What’s amusing is that fans are not very enthusiastic over Brie Larson’s casting as Jedi that is stronger than Darth Vader. The concern is not on her acting chops, she is brilliant in her craft, but on the given history of being the unliked character in MCU.

Some fans were more vocal in showing their disagreement of seeing Brie as Jedi.

Just saw an article of a reboot with brie larson, a jedi stronger than vader… I fucking hate disney and star wars. Best IP ever. Now the worst

What is this absolute bullshit? Sorry but who even likes @brielarson? Surely the Star Wars fans are going to flip their shit over this..
Sorry but since she claimed to be the only female superhero of note and abused her male co-stars I saw no reason to give her the time of day.. pic.twitter.com/UIMEhsjHra

It seems the backlash was not with the stronger Jedi Master but with Brie’s selection of portraying the role. Here, we would like to hear your thoughts about this decision. Do enlighten us with your opinion in the comments below.