The Conjuring is one of Hollywood’s strongest horror franchises. It is indeed challenging to scare the audience. However, the film has successfully created a storyline that gives jump scares and goosebumps to the viewers.

Most horror movies significantly fail to create that environment. It, in fact, ends up being a laughing stock. What sets The Conjuring apart from a lot of other horror movies is the element of love between Vera Farmiga and Patrick Wilson, who play Ed and Lorraine Warren. And not just their love but their compassion to help and protect the families and individuals that need help. This particular approach has been constant throughout the franchise’s installments and undeniably makes it so unique and even relatable.

In a recent interview, Vera Farmiga highlighted that the consistent romance shown in the first two installments of the film is one reason she finds this project and its characters so intriguing and exciting. Stating,

What I find fascinating, and it’s that they are the personification of love. It is more of a love story than it is a horror story to me, and that’s what makes it so unique and successful. That’s why I enjoy coming back. That message of love, and not only the Warrens’ [love] for each other, but for the work that they do and for the people that they help, that selflessness, that compassion, that embodiment of love, is really something holy and special. That makes it digestible and beautiful.

If you’re gonna have these terrifying scares, then we wanna have the most full of love moments that you can because it does become very operatic. 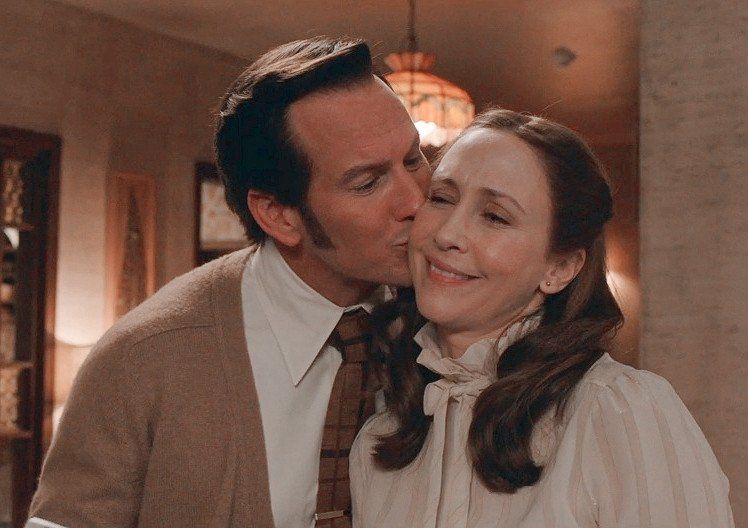 Indeed the first and the second film strongly support her statement, and the idea of the film is more of a love story while also maintaining the film’s true genre, which is horror. The first film is based on the haunting at the “Perrons’ home”. Initially building the character’s relationship for the screen, there are many subtle scenes where the couple showcases how much love and care they have for each other.

Later on, the strength of their love and the level of companionship is shown when an exorcism needs to be done, and that is where the viewers get to see the power of their love. As the witch possessing Carolyn Perron becomes stronger and fiercer during the exorcism, we can see that despite the extremely gruesome acts of the witch, Lorraine does not leave Ed’s side.

The same can be said about Ed’s love for Lorraine, as in an earlier scene in the film Lorraine gets weak with her powers during a possession. We see Ed becomes more careful of Lorraine and her well-being. All of this sets a unique storyline of love amidst all of the horrors.

In the second part, we’re shown a bit more of that love as the Warrens head to London to look into an apparent haunting, but they discover that it’s not a haunting but a demon that they have to fight against. In a scene during the film, it is shown that Lorraine gets a vision of Ed impaled on a tree trunk in the garden of the house they are investigating. That’s not the only vision she has regarding Ed. There are tons of them. This may also implicate that in Lorraine’s subconscious mind, Ed is the dearest person to her.

Later in the film, we are shown that Ed almost dies trying to save the young girl in the demonic house, but it is Lorraine’s never-ending love for Ed that makes her enter the dark world and fight the demonic force, ultimately saving both, Ed and the girl.

The film’s sequel, “The Conjuring: The Devil Made Me Do It,” will release on HBO Max and theaters on 4th June. This time the couple will be dealing with the law to save a murderer who killed people while he was possessed. It will be an interesting watch as they will have to face the county and prove the person innocent while making them believe in the supernatural. Ultimately it will be their companionship and love and trust in each other that will make them succeed (hopefully).