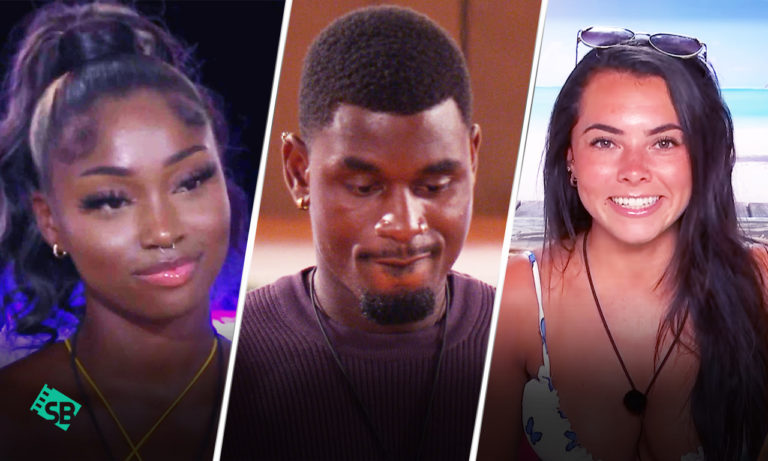 Love Island has always kept the viewers on the edge of their seats, as the show’s very nature is to share exciting as well as shocking news frequently. Recently, fans witnessed Indiyah, 23, sharing the exciting news about Dami confessing his love for her. The moment she talked about it, fans had their eyes set on Paige to see how she reacts to this.

Love Island is approaching its finale. Watch it on ITV2 and ITV Hub at 9 pm every night, except Saturday. For viewers outside the UK, here’s how you can watch Love Island UK Season 9 from anywhere in the world.

Dami and Paige have been the best of buddies within the villa and both of them have been supporting each other through recoupling, heartache, and drama. After referring to Dami as her best friend, Paige also proposed to him during the Snog, Marry, and Pie.

The two have also been seen “flirting” on the show. Eyebrows were raised after Paige quizzed Indiyah on how and when Dami dropped the L bomb.

“Literally you guys don’t know but like two days ago he may or may not have dropped the L-bomb,” Indiyah told the girls.

Dami’s best pal Paige was eager to know more about what happened between him and Indiyah.

Paige quizzed, “Spill the beans, who said it first, and what was the situation?” 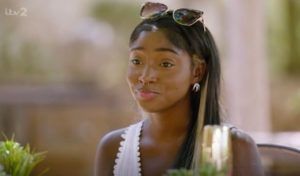 Paige touched her heart, showed her happiness for the couple, and said, “I’m so happy for you guys.”

Fans, however, don’t buy her reaction and claim that she has Dami in her mind, and not just as a friend.

One fan wrote, “Not Paige wanting to know why Dami said the l word,”

“Paige definitely wants to make little Jaydens with Dami ’cause she is obsessed with him, even from this girl’s date you would realize it. #LoveIsland.”

Another added, “Paige is that annoying girl best friend to Dami, I feel bad for Indiyah #LoveIsland,”

A third wrote, “Paige gets far too involved in Indiyah and Dami’s relationship, so weird #loveisland,”

There was a twist in last night’s episode when Dami showed some concern and tried to know how her romance went with Adam Collard. Dami eagerly asked, “How did you guys sleep, Paige and Adam, any cuddles?” 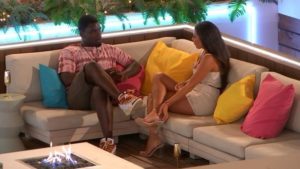 Adam, 26, happily replied, “There was a little cuddle.”

Do you think there’s something fishy between Dami and Paige? Share your views!

Fans claimed that these all are consequences of a Heart Race challenge that took place a few weeks ago. Paige was the girl who increased her friend Dami’s heart rate higher than any other girl in the game. Moreover, during the Air Hostess challenge, Indiyah had a disgusted look on both Paige and Dami, meaning she noticed something too. Fans have also been noticing how Paige gets jealous and envious every time the Dami and Indiyah are together. Viewers are also convinced that Indiyah is truly aware of the situation.

One viewer wrote, “Indiyah knows something’s up with Dami and Paige as this is her face every challenge.”

One more fan stated, “Indiyah’s face when Paige went near Dami I can’t.”

A third added, “The LOOK on Indiyah’s face when Paige buckled up Dami.”

The real twist comes when boating time starts in Love Island. In one of the final episodes of the season, remaining couples go on one last date on a boat ride, and the past seasons have shown some really crazy twists after the boat rides. Fans think that the boat dates are actually cursed because they spotted in previous Love Island seasons that whosoever went on a boating date ended up apart.

As the season approached its final days, fans were excited to see when the couples will be sent for a boating date. However, viewers still won’t know the the advancements between the couples until the show ends up.

In the latest episode, viewers witnessed that Adam and Paige were sent on a boating date to have a look at beautiful views and to figure out the true potential of their relationship. Fans are convinced the whole drama between the two will be concluded and they would end up lost in feelings for each other after the boating date.

In the previous Love Island seasons, three previous season couples were set up on boat dates, but they broke up soon after the show ended.

This has also happened with another pair. Liberty Poole and Jake Cornish were two of the supposed “boat curse” victims from the previous year’s series. They split up while still in the villa.

In the year 2019, Amber Gill and Greg O’Shea were sent for a romantic boat date and they were about to win the show but again, the boat-curse had them splitting shortly after the date.

Chris Hughes and Olivia Attwood also spent time on a boat before splitting less than a year after the show.

It was the first time that Adam and Paige went on a boat date, and as they did, fans started to share their stories on Twitter.

One user said, “So Paige & Adam got the boat date?!? I wonder what could go wrong. Is not like we all know what that means.”

Another fan joked: “Paige and Adam got a stupid little boat date they going home for sure.”

The third viewer posted, “If ur final date is on a boat, then it’s never going to last. I said what I said,”

The final countdown has already begun and the other two couples seem to be very promising. Fans are really looking forward to seeing which couple will be the crowned winner of Love Island UK Season 8.