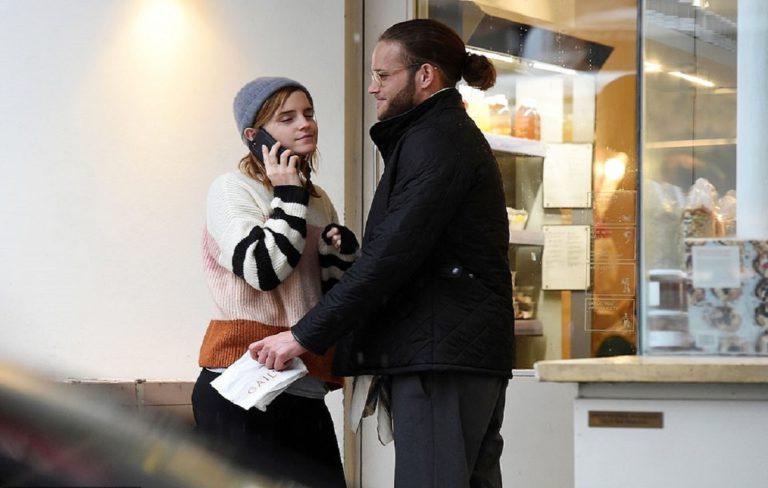 The Harry Potter actress, Emma Watson was seen sharing a passionate kiss with an unidentified man in London. The two were spotted outside Gail’s Bakery while waiting for a car.

Emma leaned in for a kiss while taking a call on her phone, the star looked delighted to be with this new mystery man and so did he. The couple looked really happy and Emma couldn’t get her eyes off her new handsome man.

The two were reportedly going out for a lunch date when spotted. As per now, we don’t know who this hunk is, but he was smartly dressed and looked sharp. Emma on the other hand wore casual and low-key, yet looking stylish.

Previously Emma was previously dating Dominic Piazza, who is a lacrosse player, they were dating until August 2019 and were spotted many times at different locations.

Emma Watson also had a brief romantic association with Oculus CEO Brendan Iribe. Brendan co-founded Facebook’s virtual reality project back in 2012 and was on it until last year. Brendan who is 40, stated on his exit that,

“After six incredible years, I am moving on. Working alongside so many talented people at Oculus and Facebook has been the most transformative experience of my career. This will be the first real break I’ve taken in over 20 years. It’s time to recharge, reflect and be creative. I’m excited for the next chapter.”

The Harry Potter actress was also rumored to be romancing with co-star Tom Felton earlier this year as they posted an intimate picture taking guitar lessons.

The 29-year-old actress was also in a 6-month relationship with Glee’s Chord Overstreet, however, the couple tried to keep it low-key but were spotted many times hanging out together in Los Angeles.

Another romance of Emma Watson was struck up when she met producer Roberto Aguire on the sets of Harry Potter and the Goblet of Fire.

lastly mentioning, she had a long term relationship with Will Adamowicz who was a fellow classmate at Oxford University, the two started dating back in 2011.